HomeNachrichtenSPC for local elections without barriers

SPC House of Media is planning and buying media for a nationwide campaign, which aims to encourage people with disabilities to participate in local elections on November 16, 2014.

Principal of the campaign is the Association of Friends of Integration. SPC defeated 4 competitors in the tender for the planning and buying the media announced by the Association.

The campaign is an update of the 2011 campaign with the motto "We go to the elections", expanded with the message " Absentees do not have a voice."

The campaign encourages to take advantage of the facilities provided by the Electoral Code in order to facilitate voting for people with disabilities (adaptation of polling stations, voting by correspondence or by proxy), and emphasizes the importance of the participation of every citizen in elections. It also informs the electoral committees of the need to adapt their websites to the needs of users with disabilities. 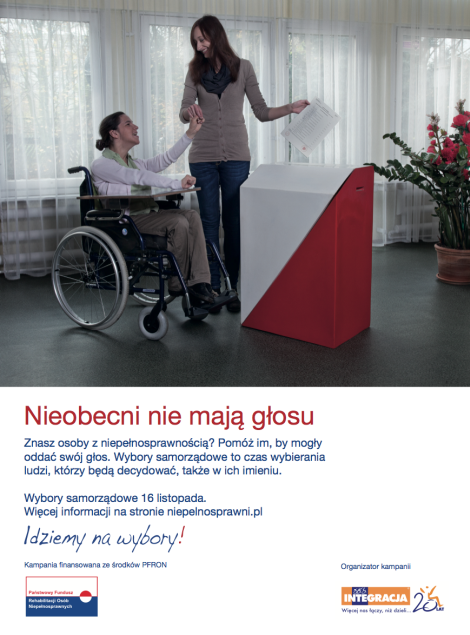 Ambassadors of the campaign are people with disabilities known for their active social and civic attitudes, such as Janusz Świtaj, Monika Cieniewska, Monika Snycerska and Agnieszka Bal, who will appear in the TV spots and newspaper advertisements.